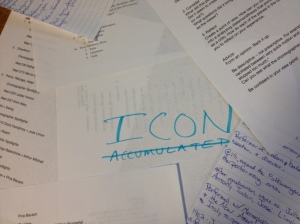 Not metered time or measured time but stranger notions like the volume of time, past time, time peeling away. http://bombsite.com/issues/45/articles/1720

YR Whose modern dance turns up in your rehearsals? What era?

TB: It’s in our training . . . we all know it. The torso as an expressive instrument augmented by the arms, legs, and head to spiral and arch into forms that bear emotional connotation.

YR You’re talking about certain conventions of representing emotions that we rebelled against in the early ’60s. Those conventions are hard to keep down.

TB But then the other side of this is that during Newark, I realized that the combination of two mechanically derived motions conducted at the same time—folding the arms up and rounding and dropping the head forward—if the two collide, looks like a person wailing. That fascinated me, and from then on I’ve been looking for that edge between mechanically derived motion or action and emotional affect.

YR What do you mean by “mechanically derived?”

TB When I give myself an instruction, when you’re standing there and you’re trying to figure out what to do and you give yourself an instruction . . . One arm goes up, buckle your left knee and take the fall out, see what happens, that kind of thing. Well, that’s what I mean by a mechanical instruction. And then it means something, like you’re saluting the American flag.

YR Yeah, right. You have to watch out for that one.

TB But then there’s an edge to it where it’s really interesting—to trigger a recognizable gesture and then mediate it immediately with something else.

YR Yes, well that’s what’s so fascinating, the way you use gestures and rub them out, erase them, or ride over them. A dance gesture so easily invokes both the quotidian and the symbolic.

TB Everyone knows them. You look at them and read them all day long.

YR The ones I like . . . Sometimes a foot will flex and a hand, just a hand will move. I mean these extremities that suddenly come into unison on the body. You have a couple of those inMG. Probably a lot of them.

TB There are layers of intensity in the actions cast throughout the body, so we tend to look at the larger stroke of things, but depending on that dialogue between me and my viewer’s eye, it’s a matter of where do I make them look next.

YR But it means that the rest of the body has to be so still for those small details, for the extremes to register, and that’s where the training comes in. You have to be that still on one leg in order to make these ordinary gestures visible.

TB You mentioned that I obscure, erase, ride over gestures and this is true. I retain a modicum of privacy while on full view in performance by purposely complicating an uncanny moment, feeling certain the audience can’t see it all.

YR But this brings to mind another characteristic of your dancing. It’s like starting out with a body that doesn’t know itself, and the agency of movement has to be visible. You take this to a point where one limb will actually initiate action on another limb and set up a series of events, and that happens between people as well—someone will hook someone’s leg in passing and that will precipitate a whole set of moves. And so there is often a visibility of cause and effect, and a wonderful, zany logic in these seemingly accidental, casual encounters.

TB Motivation to move is a big issue for me. What catalyzes an action. Mainly because so much of what I do comes from a physical source, so I’m always up against that question.

YR Well, all dance comes from a physical source.

TB Some choreographers take inspiration from music—both structure and temperament . . . and other sources. My sources are generally ideas and movement. Different each time out. I think the subject of abstraction generating multiple non-specific meanings is where I’m working right now.

YR What do you think of these classical references that come up in your work? It started for me in Set and Reset, the Egyptian motifs, the flattened out, twisting of the torso against hips. This gets more mythified in Foray Forêt with your entrance in the long dress. I know you never thought of that religious connotation, but how do you feel about that? I’m sure I’m not the first person to have made that observation.

TB Someone commented on the classical, formal arrangement of dancers placed in the wings like statuary. I’m not altogether comfortable with the aspect of the priestess entering, but I accept it. I accept it on the grounds that I had pretty much stopped dancing just before that and the making of that solo was my return to dancing.

YR I wasn’t aware that you had stopped.

TB I was grinding to a halt. I think I was still in pieces. Those were the years that my mother was dying, and I really was moving less and less as she moved less and less. After she died, the summer that she died, I realized that it wasn’t me that was dying, and that I perhaps could still dance and I embarked on that solo.

YR So it is like a wraith coming back.

TB It is. But also, there are a complex set of factors that determine the outcome of a new dance, a kind of negotiation between reality and imagination.